Plant a tree in memory of Murrna
An environmentally-friendly option 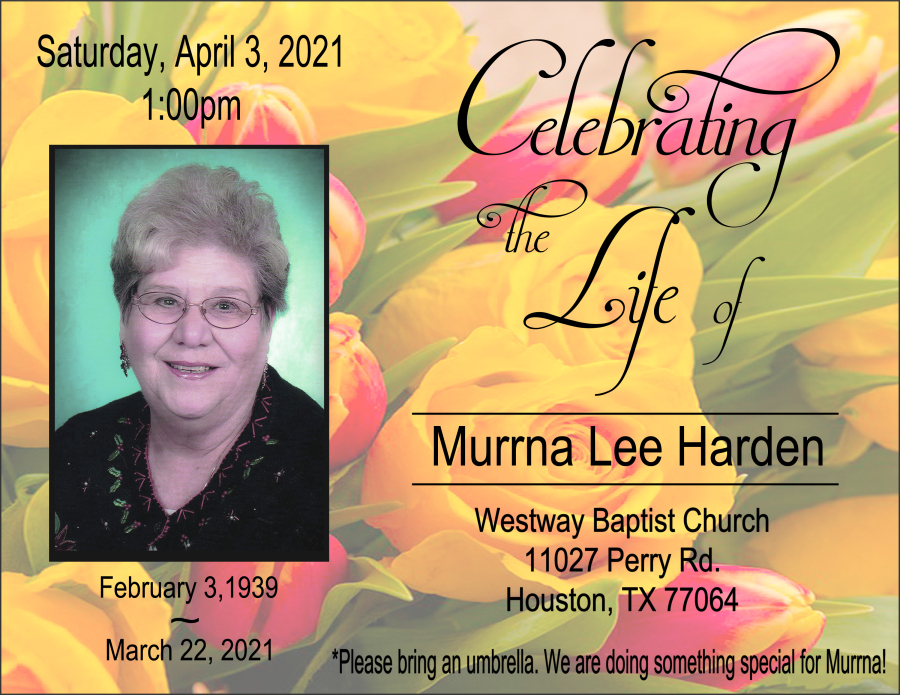 Born in the small town of Houston Texas (lol)… Murrna (aka: “Meaner”) always loved her friends and family! Her and her 2 besties, Geraldine Sharpe and Bea Sterner were inseparable and I’m sure a little wild. (At least from all the stories we have heard) They graduated from Stephen F. Austin High School in 1957 and they all remained friends for well over 60 years! Trouble, Trouble and more Trouble! Murrna played volleyball in High School along with archery and bowling. She bowled a few perfect scores in her time and was on her way to being a Pro Bowler BUT Life had other plans!

Fun fact: Mom was a Clairol hair model, a Girl Scout leader, played the piano and organ for her church and a Sunday school teacher. (Her mother played as well) In fact, she played the piano and sang for the military boys at a few USO Military Shows in the 50’s as an 18 year old. AND she went to high school with country singer Kenny Rogers! (Her bestie Geraldine dated him at one time.) She also, was a soccer coach for a short time (even though she had never played) and was the Referee Assignor for North Texas Soccer Association for years. She quickly became friends with professional soccer players such as Kenny Cooper, Charlie DeLong and Kyle Rote Jr. of the Dallas Tornados. This was great for her young soccer playing and “boy crazy” daughter!

Murrna fell in love, got married and moved to Dallas where her and her husband opened their own Pharmacy. After their divorce, she took the world head on as a single mom! She was full of perseverance and commitment to her 2 children. As a single mom she worked 2-3 jobs to keep a roof over their heads and food on the table. She made them feel as though they had riches beyond compare because they never knew they were going without. When she had a few extra dollars in her pocket, they would get into the car and just drive. She would say, “let’s just see where the car takes us!” They would end up in another city or state, at the beach, or wherever, depending on the “car’s mood” of course!

She was a hard worker and worked at Sherwin Williams for years, Tom Thumb in accounts payable and receivable and Harris County Sherriff’s Department in Fugitive Warrants, where she eventually retired! She gave all she had to her family! Murrna loved teaching Sunday school and attending her kids soccer, softball, football and basketball games; also, she has been known to get reprimanded by a few umpires and referees in her time! She loved to yell “Get some glasses ref!”

After her son’s death at the age of 18, Murrna moved back to Houston where her first grandchild was born and she never looked back. She loved being around her family, friends and especially

her grandkids. They were the light of her life! (at least until the great grand baby, Sadie came along!) When they were young she would help take one or two to a sports practice, music rehearsal or school event. She loved going to all of their games and concerts. She thought they were the best things since sliced bread! Although, she did love her milk and cornbread in a glass! She loved her family well!

She also, loved a good prank and a laugh, unless it had to do with a rubber snake or spider! Her nephews loved to mess with her all the time! Every time they were around her, their motto was “Let’s get Aunt Murrna!” She was always good for a laugh or two!

Her favorite place was the beach (well, anywhere near water really) and she loved playing cards with her friends. Hand and Foot became her game of choice and “You’d better follow the rules! (Her rules!) She spoke her mind whether you liked it or not but you always knew she cared about you. She never met a stranger. More times than not, she would be in a line at the store and by the time she checked out she knew the entire life story of the person in front of her or behind her! People would just talk openly to her the first time they met her. The kids would always ask, “Do you know her?” she would laugh and say, “No, we just met and I have a new friend!” This happened on a weekly basis!

Murrna was never afraid to be who she was and did not care if others saw the flaws/cracks in her armor. Even when going through stage 4-breast cancer, she would drive herself to chemo and then drive herself to work. She would work a full 8-hour day and drive home, and repeat all of this for 6 months, everyday and after loosing all her hair! She would just stick a hat or scarf on and go! It did not stop her from living! Talk about strength!

She loved people and they loved her! What a great legacy to leave your family. To love unconditionally and to truly listen to others! She also loved all of her children’s friends. She “adopted” many as her own and they immediately called her mom! All were welcomed in her heart and her home. (and she was Mimi to many!)

“You were strong to the end, crossing the finish line without waiver. To know you left no stone unturned and a life lead with heart is all you could do. A life well loved is a life well spent. Faith and family were the lights in your eyes that kept burning to the end. May you find rest in the arms of your Heavenly Father where there is no pain and your heart is reunited with the loved ones gone before you. You will never be forgotten, you will forever be loved and forever will our hearts be full of the love and laughter you gave.” ~Sherri

“Let them see the cracks in your armor because that’s

how the LIGHT gets out!” ~Wynonna Judd

Plant a tree in memory of Murrna by clicking here.
To send flowers to Murrna's family, please visit our floral store.

A service summary is not available

Plant a tree in memory of Murrna
An environmentally-friendly option

Plant a tree in memory of Murrna

2 trees planted in memory of Murrna

There are 7 photos available in the gallery

Dearest Ones, your Mom was my best friend. She was with me through thick and thin. She remains in my heart forever. I will miss her sorely.

Thank you so much for staying in touch with me.
Dorthy Trammell

A Memorial Tree was ordered in memory of Murrna Lee Harden by Dorthy Trammell.  Plant a Tree

Sherri. you seem so much like your mother who was a great person and friend in High School.  Love and prayers to you and the family..

What a fierce, compassionate, kind and wonderfully funny lady. I will treasure the memories.

A Memorial Tree was planted for Murrna Lee Harden

Plant a tree in memory of Murrna